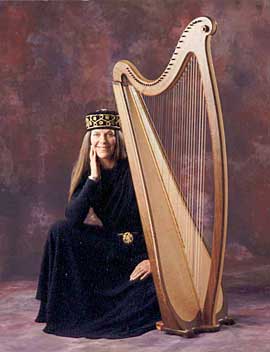 Diana Stork is well known in the international harp world for her eclectic style, which incorporates ethnic, classical, and contemporary harp traditions, as well as for her original harp compositions. Based in the San Francisco Bay area, Diana has performed for diverse groups such as the Lines Contemporary Ballet, the Maihar Orchestra of Maestro Ali Akbar Khan, and the Peace Ceremony of Thich Nhat Hahn at Grace Cathedral. She performs as a soloist and in Twin Harps, the world music/fusion trio Geist, Celtic harp trio Triskela, and in sacred music performances with singer Ruth Cunningham. Diana’s music is on numerous albums including Harpestry on Universal Records, and Sacred Light on the At Peace Music label. In 1998 she co-produced the CD Celtic Harpestry, which became a national PBS Special. Diana Stork may be best known for her success in sharing the wonders of the harps with the public. She is the Founder and Director of the Festival of Harps (sm), an annual multi-performance celebration of the harp in the San Francisco Bay Area, which has featured master musicians from around the world for nearly two decades. She is the Artistic Director of the World Festival of Harps touring show, a devoted teacher, and the Founder/Director of two active harp ensembles for youth, the Bay Area Youth Harp Ensemble and the Mission Harp Ensemble, a group for Latino children.