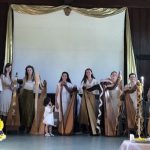 Every harpist associated with the Bay Area Youth Harp Ensemble (BAYHE) has fond memories of our annual Winter Solstice performance rituals at the Isis Oasis Retreat Center. We have been leading those for over 15 years!

This summer we got together for the first time and used our network to have our very first Summer Solstice ritual. We used classics from our repertoire, some individual pieces from our harpists, and some new songs to spice it up. We spent a lot of time behind the scenes designing the ritual and picking accompanying music and poetry. We interwove summer traditions and music from around the world into a one-of-a-kind performance and celebration full of ritual, music, glitter and fun. We wanted to invoke feelings of love, light, and joy–all in the spirit of bringing folks together to find joy in the changing of the season, and with each other.

This year we are happy to note that the event was a success.  We played for a appreciative crowd, in addition to playing for a goat, a parrot, a dog, and a red chicken (ask us if you want to know more about these special guests)!  Our program was a mix of different musical styles –from an Iroquois lullaby to traditional latin American music; as well as a number of pieces written by our Director, Diana Stork. Very special was the reunion of Diana’s harp trio Triskela for this event, who performed with BAYHE and also played a number of solos.

A special thank you to our High Priestess Terri Woodfolk for her starting everything off by accepting Isis’ offer to do a Summer Solstice event; and for all the many tasks she did to make this happen. A thanks to our director Diana Stork for putting together the music along with harpist Laurel North. Some of our other key players this year were Alexis working on early rehearsals, Anna working on PR with Terri and Diana, Shawna for helping lead many of the rehearsals, and Laurel– who did a great number of tasks from beginning until the final hand fasting and music as folks were leaving the theatre (along with our special guest –esteemed concertina player Sean Wahl). It really took a village this year to put everything together. Happy Summer!!